Not content with the empty business parks they already have,  the new one under construction at the Bexhill end of the Link Road, and the one they would love to build over the top of Hollington Valley (if they can get over their little local difficulty with planning permission), SeaChange is putting forward proposals for yet another road, providing access to yet another business park.

‘It’s now time to build the final piece of the ‘economic growth corridor’… the North Bexhill Access Road’.  That’s according to SeaChange, who  are proposing to build the road to ‘provide access to extensive business development land… helping local firms to expand and attracting companies to the site, creating jobs.’  Or, depending on how you look at it, destroying more of our countryside, creating more traffic, and – almost certainly – failing to bring the promised benefits.

Whose road?
A consultation about the new road was advertised in the Hastings Observer on 19 June.  Curiously, the advert gave not the tiniest indication of whose road it was: 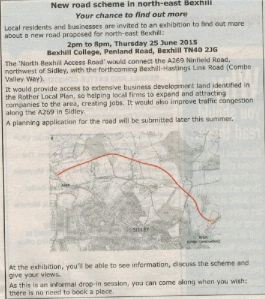 The mystery continued at the consultation: eight information panels (which looked rather familiar) but again, no indication whatsoever of who was responsible.  We had already guessed it was SeaChange, and we were right, but why are they being so secretive?  Are they hoping nobody will notice it’s a SeaChange project?

Growing, growing
In the 2006 Rother Local Plan, the area north of Bexhill due to be developed was much smaller:

Now, the allocated area is much larger: this, according to an engineer at the exhibition, will be reflected in policy BX3 of the ’emerging’ local plan, in which the road is referred to as the ‘Country Avenue’.  However, BX3 (below) refers to a much smaller development area, that shown in the map above.  The new proposal (map below) extends the access road all the way to Freezeland Lane, almost doubling its length over the original proposal.

The map shows that the road will join the A269 well to the west of Sidley: the entire area to the south of the road – currently farmland and woodland – could be infilled with housing and business parks. 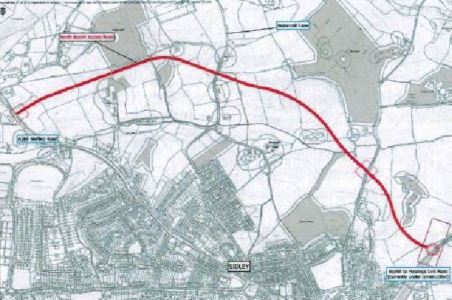 There were no SeaChange staff at the consultation, only the (freelance) PR representative, Tariq. It does seem extraordinary to hold a consultation without the company that is behind the proposal: what have they got to hide?  There were various engineers from Campbell Reith, the company which was contracted to build the Queensway Gateway road, and which has presumably been contracted to build this one.  However, neither Tariq nor the Campbell Reith people knew (or were prepared to say) how much the road would cost.

What we did find out was that it would be built with public money from the South East Local Enterprise Partnership.  There was a suggestion that East Sussex County Council might also be putting in some money.  SELEP has funded many other SeaChange projects including North Queensway, the Queensway Gateway road, the Bexhill Gateway road and Sovereign Harbour in Eastbourne.

We later managed to dig out a document which suggested the cost of the road would be £5m, but this cannot possibly be correct: the road is a little less than half the length of the link road, which is going to cost over £116m.  We ventured a ballpark figure of £50m: the engineer scoffed, saying that it would never be built at that price.

We were assured that many, not to say most,  of the people who had visited the consultation had been very much in favour of the new road.  This claim was slightly undermined by a quick shuffle through the feedback forms, most of which were very much against the road: words used included ‘angry’, ‘concerned’, ‘worried’, ‘damaging’, ‘unnecessary’, ‘pointless’, ‘extremely unhappy’ and ‘devastated’.  These were not the words of people who were keen to see a new road in their locality.  Could it be that local residents are getting fed up with the apparent desire amongst decision makers to cover our whole area with concrete? 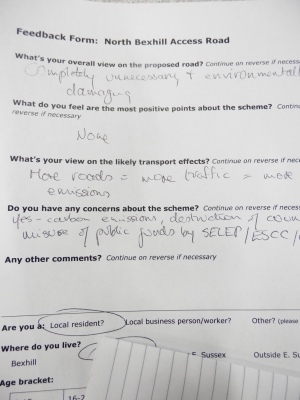 You can see the full set of exhibition panels about the NBAR here. If you want to make a comment, you have to do so by 2 July: see the last panel for details.

SeaChange projects running late: when will the jobs arrive?

Theme by Anders Noren — Up ↑